Composers are often asked to describe their music – an impossible request – but when I was recently asked by the Cheltenham Festival to do this in five words, I decided that windswept, dreamy, turbulent, melancholic and painterly just about sums it up. I also value colour, the vivid and dramatic, and I strive for a beauty of sound as well as a poetic utterance.

I am a composer of orchestral, chamber, vocal, choral music and music for the stage in the form of two operas, a melodrama, a monodrama, and a dramatic work based on King Lear. I’ve written symphonic orchestral works as well as concertos for oboe (two), violin, cello, double-bass, and a double concerto for violin and viola. My catalogue includes a work for string quartet and orchestra as well as one for saxophone quartet and wind orchestra and there are a significant number of chamber works for with strings, wind and piano. Writing for voice, both solo and choral, as well as in stage works, is a major aspect of my work. My two operas have been performed internationally with seven productions of the first one, Golem (1989) in England, USA, Germany and France, and two productions of the second, God’s Liar (2001), in London, Brussels, and Vienna.

The Hallé recorded Orion over Farne,  Violin Concerto and Concerto for Orchestra in 2014 (NMC label) as well as releasing my oboe concerto Apollinaire’s Bird as a download the same year. RNS has recorded a number of other works on NMC including Golem and my Cello Concerto.

I have also enjoyed fruitful creative relationships with The Lindsays, Hilliard Ensemble, Ensemble 10/10, Psappha and Quatuor Danel, and works have been performed at the BBC Proms, many UK festivals, with international festival appearances including in Warsaw, Tokyo, Aspen, Maastricht, Salzburg, Vienna, Montepulciano and Schleswig Holstein. It was in Warsaw when I was a student in 1971-2 that I got to know Poland’s foremost composer Witold Lutosławski and began a long association and close friendship with him.

I live in the far north of England, in Northumberland not far from the English-Scottish Borders, within sight of the Cheviot Hills and within reach of the Northumbrian coast. The landscape, its changing colours, huge skies, and the poetry of this part of England have influenced many of my works as well as forming a thread throughout my music. Painting is also important to me and here too the dramatic northern landscape plays its part. 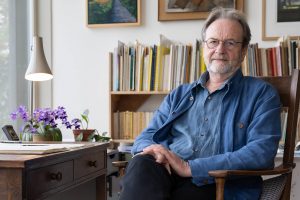